Weight Management: What Works and How Do We Tell Patients

Early in his career, Dr. Yoni Freedhoff realized the medical community, himself included, was not adequately managing obesity. Many patients requested weight-loss advice, but he had little to offer as the management of obesity is not taught during medical school. Consequently, Dr. Freedhoff pursued training from the American Board of Obesity Medicine and began speaking differently to patients and policymakers. He has spoken before the Canadian House of Commons and Canada's Senate regarding his concerns about Canada's Food Guide, and he has been referred to as Canada's most outspoken obesity expert and "nutritional watchdog." Dr. Freedhoff is quoted regularly in the international press; sounds off regularly on his blog, Weighty Matters; and has contributed to US News and World Report, Vox, and the Huffington Post. He is an assistant professor of family medicine at the University of Ottawa. 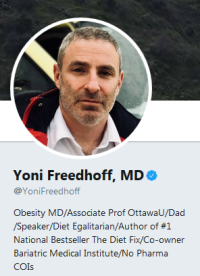